A couple of days ago while attending a meeting of the Western North Carolina Linux Users Group (WNCLUG) someone asked if anyone knew how to get an EASYCAP analog to digital Video Encoder fob working on Linux. I’ve posted a photo of an EasyCap below. A few years ago I used an EASYCAP on Linux to transfer some old VHS tapes to my computer. While I haven’t used the EASYCAP in years, I still had the files that I used to make it work on Linux.

My EASYCAP was purchased from eBay several years ago. Its only physical marking is “EasyCap”

The first step in getting an EASYCAP working on Linux is, of course, to throw the included Windows driver CDs into the trash. I performed the transfers using two very simplistic bash scripts (one line scripts). Here is the “how”:

I have a folder with a bunch of files, mostly because I needed to compile ffmpeg from source because it was missing from the repository, but the following worked for me:

I needed to de-interlace the output so I also used this script: 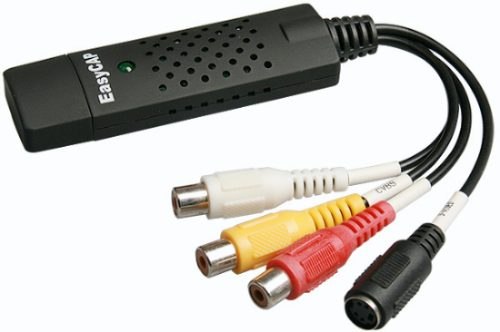 UPDATE: There are several version of the Chinese EasyCap devices. I discovered a great resource for dealing with each of the variants. See the link below:

Quote | This entry was posted in Electronics, Linux, Programming. Bookmark the permalink.

1 Response to EASYCAP analog to digital Video Encoder for Linux