Replacement Cheapo Cell Phone Battery – the Good and the Bad

I currently use an HTC Droid Incredible 2 smartphone. I like many things about the phone but I hate the battery life. Battery life is less than my previous Samsung phone and I set about improving it. The biggest help was installing the Android app “Easy Battery Saver” which does add about 20% to 30% to the battery life, with my typical usage, but that wasn’t enough to satisfy me.

Via eBay I purchased, from Hong Kong, a 3500mAh battery (See Figure 3, below) to replace the factory’s 1400mAh battery. Since the battery is too large to fit under the phones factory battery cover phone back, the seller includes a replacement back cover. While the phone doubles in thickness and weighs more, I was willing to accept that for the extra battery life. Boy, does the new battery provide the life – with my typical usage, in combination with the app “Easy Battery Saver“, I can get 36 or more hours of battery life.

Unfortunately, everything wasn’t as good as it seemed. While travelling during the holiday season I used the phone’s GPS navigation to find a restaurant, or at least I tried. Lacking a mount, I usually just prop the phone in the between-seat console cup-holder.  This has worked well in the past and the cup-holder cavity seems to amplify the speaker making it easier for me to hear the directions. However, with the new extended battery and cover in place the GPS wasn’t working well. The GPS kept dropping out whereas that had never happened before with the phone situated identically. Obviously the new extended battery and cover had, somehow, deteriorated the GPS’ signal.

I compared the covers of the factory original and the Chinese extended battery version (See Figure 1) and noticed the previously ignored metallic spray paint in two places within the cover. In closer examination, the conductive paint has contact areas that mate with contacts on the telephone’s circuitry. The factory original metallic conductive spray paint is crisply and neatly applied with a gold colored paint. That of the Chinese extended battery version is bronze in color and is sloppily applied with over spray.  See Figure 2, below. I noticed that the two contacts near the phone’s bottom in the factory were electrically separated while on the Chinese extended battery version they were combined, i.e., shorted together. The pattern of the two contacts near the phone’s bottom appears to be a patch antenna and is comparable in size and shape to one that I removed from an old Dell laptop. Two contacts would be expected – one for ground and the other for the driven element of the antenna. The pattern of Chinese extended battery version seemed wrong having the pins shorted together so I attempted to scratch away enough paint to insulate them. I failed as even though the visually appear to be separated, my ohmmeter indicates that they remain shorted. The other thing that is remarkable is how very different the shape and size is between the two covers. It is logical to assume that the factory original is the correct size and shape – after all, it works well.

Patch/microstrip antennas have to be carefully designed to work correctly. The shape is not arbitrary and is tuned to the frequency, which, in the case of GPS is 1.57542 GHz (L1 signal) and 1.2276 GHz (L2 signal). Regardless of which of the two metallic paint antennas inside the cover is used for GPS, the shape is dramatically different from the factory antenna’s shape which, intuitively means that it will be tuned off-frequency and thus will provide sub-par performance and that is exactly what I experience.

It appears that the cheap price for the Chinese extended battery set is just too low to produce acceptable quality. I have removed it and returned to the original factory battery. Oh well, it was cheap enough to take the risk.

[UPDATE] –  For $9.99, from eBay dealer “alphadailydeals”, on 9/18/2014, I purchased a genuine HTC OEM extended battery and rear cover. It works beautifully and even fits my plastic holster. He has more – The item is listed on eBay as “OEM HTC Droid Incredible 2 Extended Battery & Door 2150 mAh BTE6350” 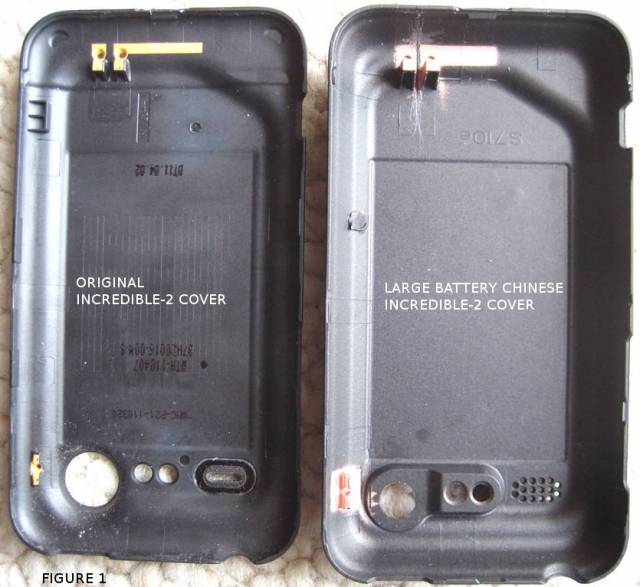 This entry was posted in cellular, Electronics, wireless. Bookmark the permalink.